So, you are crushing on this one guy. Have been for a while. Hard to not when he’s flirting with you, right? But it hasn’t gone beyond flirting after what feels like forever but more like a month-ish.

What could the problem be? Is he scared? Afraid? Shy?

There’s no easy way to say this, but you are not this guy’s target. He’s got his eye on someone else but enjoys flirting with you.

I’ve been here. Oh boy have I been here. Probably more than once but one particular time stands out to me. I’ll get to that story in a bit. For now, let’s break down what’s happening in your situation.

So, you guys have been flirting – great! But you realize one day that he’s not making any kind of moves to indicate that he wants to take it any further. What the heck! C’mon guy, none of us are getting any younger. So, what’s up?

It could be any number of things, but one possible and likely scenario is that he has his eye on someone else.

Then Why Flirt With Me?!

So, if you aren’t the person he’s after, why is he leading you on with flirting?

There are a few possibilities here… 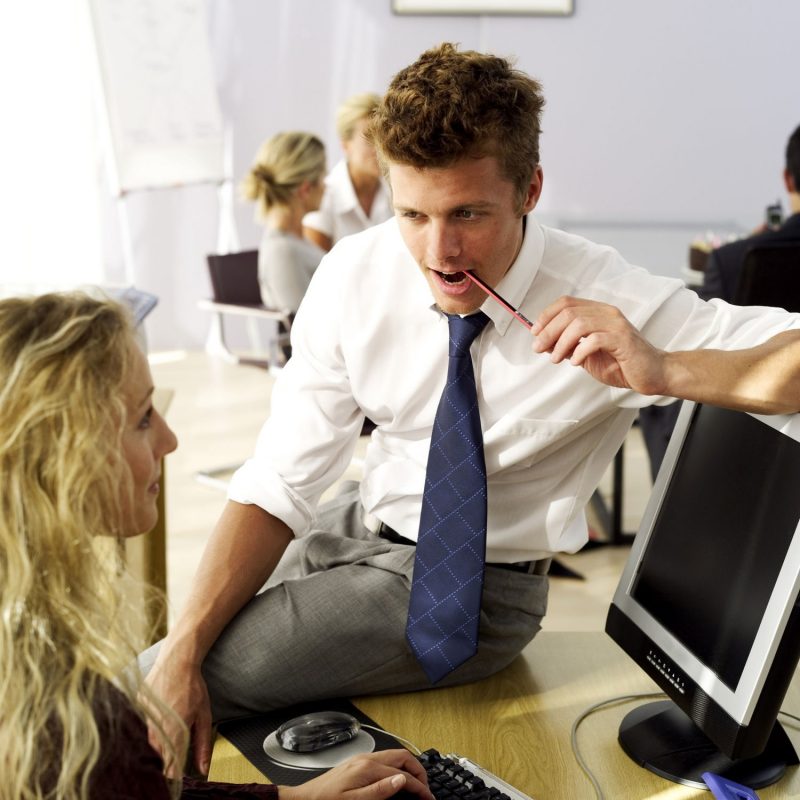 That’s just his nature. Maybe he sensed at some point that you, too, had a flirty personality and he just rolled with it. Not necessarily any bad intentions here. Good chance he flirts with other girls for fun too. What should you do? Well, nothing. If you think you’re developing actual feelings now it would be a good idea to run far far away. If you’re fine with it going nowhere, then relax and have fun flirting. If it doesn’t work out with ole what’s-her-name then who knows, maybe you two will give it a shot.

I feel obligated to mention this though. IF it does work out that way…. he doesn’t get the intended girl and then goes after you; well, I don’t know about you, but I wouldn’t love the idea of being his second choice.

Now, a true fairytale could be happening here and he’s just simply realizing he likes you more than he realized or there was some sort of unexpected spark but just keep in mind how things started and don’t fall too hard until you have some sort of indication that he would stick around for the long haul.

2. The other woman doesn’t want him…yet.

He’s wasting time in an effort to, well, entertain himself I guess is the best way to say it. Now might be a good time to give you my personal story, I’ll keep it brief.

It was college. I was into a guy who I had known for a while through mutual friends, but he had always been dating this other girl for the longest time. They broke up, time passed, and we started talking.

I wasn’t tight enough in this circle of friends to really keep tabs on him but was fairly certain he flirted with many. No surprise, he was newly single and it’s to be expected.

Long story short, I realized he was just keeping me on the side while pursuing the girl he really wanted. I heard rumors of them hanging out together and there was one particular day we hung out and he was constantly on his phone texting.

Like to the point it was beyond rude and obvious. By this point I already knew what was up but guess what…I was bored too so whatever. He disappeared at some point, and they got more serious.

Girls, do yourself a favor – don’t be naïve. If you find yourself in the above situation (or similar), and then you get hurt or are surprised when he disappears…. sorry to say but you’re a fool.

Be smart, look out for you. One of my all-time favorite sayings is “People tell you who they are all the time” – there were red flags everywhere.

I stuck around because, like I said, I was bored and was pretty sure I knew how that situation would end. I was right and so, no big surprise, no heartbreak and no big deal. I think we actually remained friendly after that, casual hellos on social media so no harm, no foul.

3. The last reason is the true definition of a jerk.

He HAS the woman and also wants you. A possible cheater. This is about the guy who already has what he wants but now wants more just because he can.

I won’t call anyone out by name, but there are plenty of celebrities who have gotten themselves in trouble over this. There was one particular person several years ago who cheated on his wife.

I remember so many people – and especially guys – who commented “Why would he cheat on HER!?”. The answer is so very simple. Because he CAN. This guy most likely had women throwing themselves at him because of his money, power and fame.

Sure, you have everything you could ever need and want right there at home, but when multiple offers are coming your way to have a little extra on the side (plus mix in all the other factors of the rich & famous lifestyle) – you have to be extra strong to say no. On that note, shout out to all the other husbands/wives out there faced with those same temptations and still manage to stay faithful to their spouse, you guys don’t get the same kind of love in the headlines.

I used an example of someone rich & famous, but of course this can all happen to the average   Joe/Joanna too.

Your best bet in this case – figure out quickly if this guy is flirting OR just flirty (refer to #1 above for a reminder about the innocently flirt guy).

If you like this guy but have confirmed he likes someone else…even if there is a chance you two could eventually be more, the safest bet is to just walk away.

Maybe not completely (because in some cases that’s not even possible if you are coworkers, etc.) but try to keep him at arm’s length. Beat him to the punch, end the flirting and let him think you are the one who was actually after someone else, and he was merely a distraction.

You just saved face and probably left him asking himself “What just happened?”. Ha!

How Do You Know If You Love Someone or Just Used to Them?

How To Tell If Someone Is Flirting Or Just Being Nice?