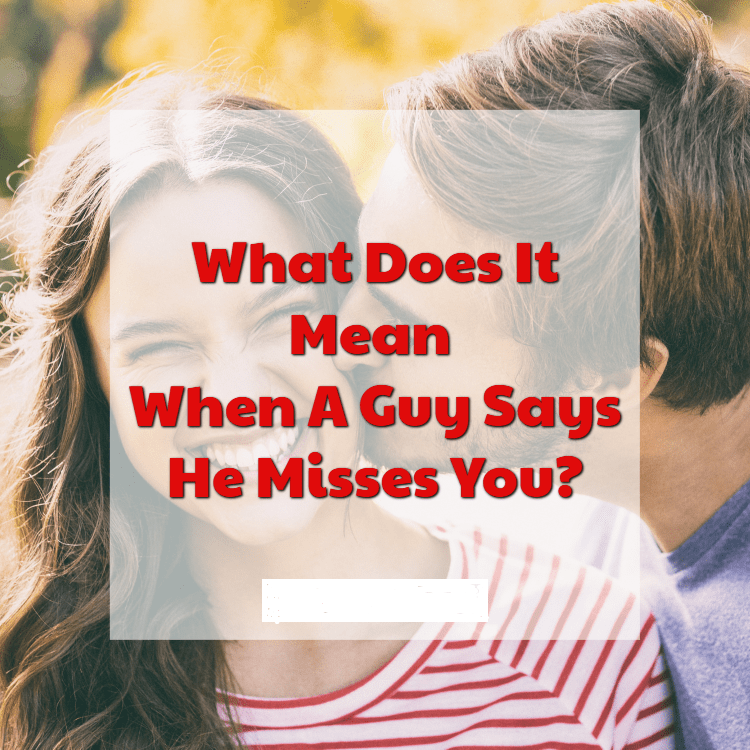 You’re sitting on your disk in the middle of a workday and you’re drowning in a six feet deep paperwork pile; suddenly you get a text that makes you feel like you’re flying on cloud nine.

You feel flattered, you feel appreciated, and most importantly, you feel missed. You start thinking to yourself: “Wow, somebody out there misses me… somebody is thinking about me!”

Yet, in the middle of these gratifying moments, a small sharp voice comes sneaking in from the back of your mind: “Yeah, you’re happy and all that, but what if he doesn’t mean it? What if he’s just saying that just to get you in bed?”

What does it actually mean when a guy sees that he misses you? Does it mean he loves you?

Below, we will guide you through the meaning behind these three little words and we will help you figure out when your guy means what he says.

1- Consider When He Says It

Before you get all lovey-dovey, consider the timing; when does he say these three little words?

For instance, did he tell you he misses you after he’s been ghosting you for days and you have no idea what he’s been up to? In this case, he probably doesn’t mean it. Girl, if he slightly misses you, he shouldn’t have disappeared on you like that!

See also  How Long Does It Take To Get a Thigh Gap?

Also, does he only text you “I miss you” when it’s late at night? It’s not a coincidence that he’s always available” at night but can’t manage to talk to you during daylight.

However, did he say he misses you after a long day of not talking and he just wants your company because he normally talks to you during these hours? Or were you supposed to hang out but you couldn’t make it for some reason?

In that case, your guy probably means it and just wants to hang out with you.

2- Consider How He Treats You Privately

Does he publicly comment on your cute Instagram posts or does he only pop in your DMS? Did he get mad that you tagged him in that group photo? Chances are, he doesn’t want other girls to see this picture!

If he only gets affectionate privately, it means that your guy has something or someone to hide. You might not be the only one he says “I miss you” to.

If he shows emotions only privately and when he does show emotion, it’s only to get physical, then you need to dump him.

See also  What attracts a woman to a man at first sight?

Taking into consideration the relationship status can help you figure out the meaning behind “I miss you”.

If you just met this guy and you barely saw him once or twice, he probably doesn’t mean it when he tells you that he misses you! There’s no way that this guy had enough time to develop feelings for you. He might be interested in you or excited to see you again, but it doesn’t mean he misses you.

Moreover, if you barely see him or he talks to you once a blue moon, it means that he is trying to get laid and he’s saying “I miss you” to every girl out there to see which one might actually work.

However, if you’ve been dating for some time and he’s used to seeing you often, it means that he’s starting to develop serious feelings for you. It might mean he wants to take things to a new level.

Another scenario is when your ex tells you he misses you. In that case, consider how your relationship ended and how he treated you when you were together.

If he treated you badly during that time, he probably doesn’t mean it and he only wants to toy with your feelings.

4- Consider His Actions Towards You

A guy can tell you he misses you tell the sun comes up and you still won’t believe him. Why? Because his words say one thing and his actions say something else.

For example, does he say “I miss you” when he feels like he’s losing the game and that you’re slipping out of his hands?

Did he see you hanging out with another guy and suddenly decided that he “misses” you? Did he see that you’re moving on with your life and it won’t matter if he’s there or not?

Does he tell you that he misses you but still doesn’t want to get exclusive with you?

The ugly truth is, deep down inside we know when a guy means these three little words and when he doesn’t. But, we sometimes blind ourselves to reality because it hurts and we actually want to believe them when they say it. At the end of the day, we all want to feel like we’re missed; we all want to feel like we’re loved. That’s why we’re so eager to hang to that glimpse of hope that somebody out there misses us!

I Regret Having Kids. What’s My Problem?