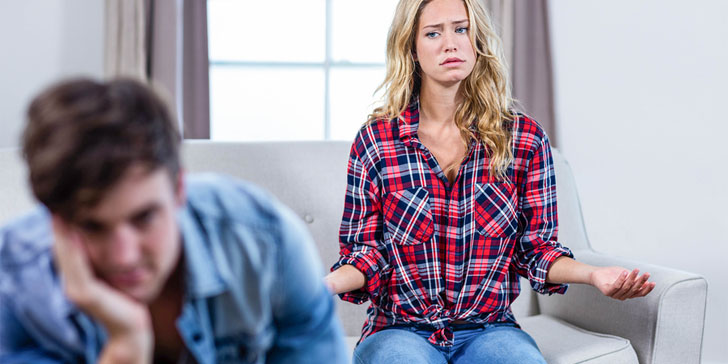 It’s true that we’re always talking about how men are born to be hunters and that they love chasing after a girl. However, even the bravest of all would never dare step into what he considers a danger zone.

So, you have a strong feeling that this guy likes you: He looks at you like you’re a masterpiece at the Louvre; you feel that his body is pulling you towards him; you feel his energy overwhelming you when you enter the room; your friends are telling you that he has eyes for you!

You start wondering to yourself: “Why is he acting all distant if he likes me? What if he doesn’t like me and this is all in my head? And what am I supposed to do now? Should I initiate the first step or give him space till he figures it out”

Something must be freaking him out and it could be why he’s not approaching you. Below are reasons that may lead guys to act distant when they like a girl.

1- You Belong to Someone Else

See also  Help, Why Is It So Hard For Me To Trust My Boyfriend?

Let’s think about it here, does this guy know your ex? Is he a friend of your ex? Another scenario that would make you approachable is if one of his friends already has a crush on you. He may be in a difficult situation and doesn’t want to complicate things over a girl.

What if you don’t feel the same way about him and he ends up losing his friend and you at the same time?

2- You’re Out of His League

This guy may genuinely believe that you’re out of his league and that nothing he could ever do will win you over. He believes that staying away is better for his heart and ego.

He must be thinking: “Man, I could never get a girl like that!”

Maybe he has seen the guys you’ve been with and they all look like WWE wrestlers. Maybe you look like a queen and you dress like a diva. Or maybe you’re on a “higher” social level because you’re always hanging around bougie people.

He’s afraid of rejection and perhaps wants you to make the first move, just to double-check that you like him the same way he likes you.

3- He’s Hung Up On Someone Else

We hate this scenario too but you can’t just completely erase it. Do you know this guy’s dating history? Was he with the same girl for three years and he still can’t get over the breakup?

That doesn’t mean that he’s not into you; it means that he is still processing his feelings towards the both of you. He probably doesn’t want to rush into a relationship with you and end up hurting you. Or maybe he’s still hoping that he will get back together with his ex and you’re just a crush that he will get over eventually!

4- You’re Hung Up On Someone Else

This guy might come to the conclusion that you’re hung up on someone else. This could be especially true if he’s been around you while you were with another guy. He’s seen the way the other guy loved you and he doesn’t believe that you could easily get over that.

Or maybe you were in a relationship for a long time and he knows it ended badly, so he must be guessing that you’re still not over it and he doesn’t want to be the rebound guy.

A guy might be head over heels for you but still not approach you. For instance, are you friends with his sister? Making a move would mean that his sister would be mad or it would mean that you could lose your friendship with the sister. Another example is when you are his friend; confessing his feelings to you might mean losing you and ruining the friendship.

Are you working in the same office with this guy? Admitting his feelings to you might end up horribly in his head. What if you don’t like this guy and you end up telling your other coworkers that he’s after you? He doesn’t want to be the official joke sponsor in the office!

This is not something that you’d like to hear, but we feel obligated to put all cards on the table. This guy might be a player and he may be playing a nasty game.

He’s pushing and pulling; he’s hot and he’s cold. He wants to keep you hooked and he wants you to do the chasing for some reason.

Some guys are born to be jerks; he wants every girl on the face of the earth to be after him, even if it means giving her mixed signals to keep her hooked.

What’s even worse, he might have a girlfriend and still wants you to think that he likes you. Look for warning signs, ask around town, and check his social media. Do people say that he already has a girl? Is there a girl commenting on his social media posts? Do you see any tagged photos for him and other girls?

If your answer was “yes”, then you need to stay away from that guy.

How To Let Go Of A Guy Who Won’T Commit?

My Boyfriend Said He Was Going to Propose But Hasn’t. What should I do?